Born in Taiping, Guangdong, in 1936, Wong moved to Hong Kong in 1938. He started to study ink painting with Lui Shou-kwan (1919–1975) at the age of fourteen, and later he received a BFA and an MFA from the Maryland Institute College of Art in Baltimore, where he studies art and design. Wong returned to Hong Kong for teaching and curatorial work after graduation, but has traveled frequently between Hong Kong and the United States. Deeply influenced by his teacher Lui Shou-kwan, - whose circle have been trail-blazing modernists of ink painting in Hong Kong – Wong explores the synthesis of traditional Chinese aesthetics, western culture, and contemporary design. His dense and mysterious landscapes, often in panorama or bird’s-eye view, have succeeded in recapturing the grandeur of the Chinese monumental landscaper of the 10th and 11th centuries. At the same time, his subtle and complex sense of design and resourceful lighting produce works of striking originality and contemporary relevance. He, like his own mentor Lui, is an inspired teacher whose influence is apparent in much of the experimental work being produced in Hong Kong to this day. 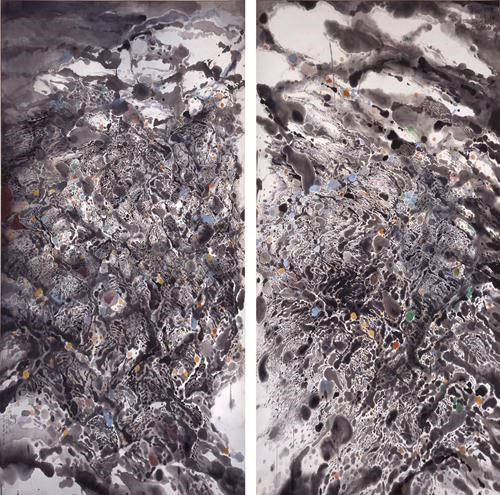